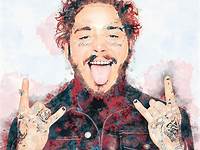 Following the success of his 2016 Stoney single Congratulations, Post followed in late 2017 with the 21 Savage featuring Rockstar, which hit #1 on the Billboard Hot 100 and was included in his 2018 grammy nominated album "Beerbongs and Bentleys". His newest album, "Hollywood's Bleeding" (2019), tells a more personal story about Austin's life after all the fame and success he has achieved.