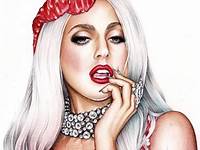 Before Gaga adopted her stage name she was in a band called Stefani Germanotta Band. She released her first EP, “Red and Blue", in early 2006. The following year, music producer Rob Fusari dubbed her Lady Gaga, inspired by the Queen song "Radio Ga Ga". After this, she recorded her first two songs as Lady Gaga (Fever and Wonderful) on Def Jam records, but was later let go.

She began her career as a songwriter for some of pop music's biggest stars, including Fergie, Pussycat Dolls, Britney Spears and New Kids on the Block, as well as American singer and producer Akon. After Akon recognized that Gaga also had vocal talent, he signed her to a joint deal with his own label, Kon Live Distribution, and then she started to work on her own new material for her debut album.

Gaga released "The Fame" in 2008, which she explained was "about how anyone can feel famous." To date, the album has spawned the international number one hit singles “Just Dance" (nominated for Best Dance Recording at the 51st Grammy Awards) and "Poker Face. The Fame then went Diamond in February 2010, selling over 12 million copies worldwide.

She then continued to release a new album 1 year later, "The Fame Monster", which she wasn't intending to make at first. She released “Bad Romance" as the first single, and has been nominated for dozens of awards all over the world. After The Fame Monster was released she released two more singles "Telephone (feat. Beyoncé)" and "Alejandro". She released "Dance in the Dark" as a promotional single, but only released it in Australia, New Zealand, and France. She undertook a large scale tour since "The Fame Monster" was released, and referred to her shows as The Monster Ball.

Lady Gaga announced her new album name, "Born This Way" at the 2010 MTV VMAs and it was released on May 23. 2011, and debuted at number 1 on the Billboard 200. It was her second studio album and received generally positive reviews from music critics, who praised its range of different styles and her vocals. “Born This Way” received three Grammy Award nominations, including Lady Gaga’s third consecutive for Album of the Year. The accompanying tour, entitled “Born This Way Ball”, kicked off in April 2012 with over 100 shows scheduled worldwide. Due to a hip injury, Lady Gaga canceled the remainder of the tour in February 2013.

On November 6, 2013, Lady Gaga released her third studio album entitled “Artpop”, with featured guest appearances from T.I., Too Short, Twista and R. Kelly. “Artpop” is a synthpop album, infused with urban, R&B, techno, rock and electronic beats. The album received mixed reviews from critics with some praising Lady Gaga’s vocals, with others criticizing its perceived lack of maturity. Following a 2-day release event – “ArtRave” – the album debuted at number 1 in the US, and charted in the top 10 in over 20 countries.

Applause was serviced as the lead single from Artpop on August 12, 2013, and was a critical and commercial success, charting within the top ten of more than twenty countries worldwide, peaking at number four on the U.S. Billboard Hot 100. The second single Do What U Want was released on October 21, and peaked at number 13 in the United States. It was followed by promotional singles Venus and Dope shortly before the album's release. The album later produced the single G.U.Y. Gaga promoted Artpop with several television appearances and performances, including her second Thanksgiving Day special, Lady Gaga and the Muppets' Holiday Spectacular.