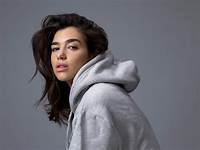 Biography: Dua Lipa was born in London on 22 August 1995. Her first name "Dua" is an Albanian word which means "love" or "want". Her parents, who are ethnic Albanians from Prishtina, had left Prishtina in the 1990s. Among the schools she attended was the Sylvia Young Theatre School. She moved with her family to Kosovo in 2008, the year the country declared its independence from Serbia. At the age of 15, she moved back to London and lived with friends, because she wanted to build a career in music. She began working as a model at age 16. Lipa grew up listening to her father, the Kosovan rock singer Dukagjin Lipa, sing. At the age of 14 she began posting covers of her favourite songs by artists such as Christina Aguilera and Nelly Furtado on YouTube.

In 2015 Dua Lipa began working on her debut album for Warner Bros. Records. In August 2015 she released her first single "New Love", produced by Emile Haynie and Andrew Wyatt. She released her second single "Be the One," written by Lucy "Pawws" Taylor, in October 2015. Dua Lipa has said that "Be the One is the only song on my album I haven't written ... [but] I couldn't not take it, it's my favourite thing". Dua Lipa describes her musical style as "dark pop". On 30 November 2015, she was revealed as one of the acts on the "BBC Sound of...2016" long list. Her first tour in the UK and Europe began in January 2016. Her self-titled debut album was released on 2 June 2017. Her European Self-Titled Tour started in October 2017. She also supported Bruno Mars on his 24k Magic World Tour in the USA in September 2017 and later in February and March 2018 in New Zealand and Australia.

On 1 November 2019, Don't Start Now was released as the lead single off of her sophomore record, Future Nostalgia. The single went on to peak inside the Top 3 of both the US and UK and became a worldwide hit. The first promo single from the album, the title track, was released on 13 December 2019. The album's second single, Physical, dropped on 31 January 2020, and was sent to radios in Europe, eventually peaking in the Top 5 on the UK Singles Chart. Despite not being sent to radios in the United States, the song debuted and peaked at #60. The third single from the album, Break My Heart, was released two days before the album, on 25 March 2020, with a music video the next day. The album dropped on 27 March 2020 (originally scheduled for 3 April 2020), to much critical acclaim, scoring an 89 on Metacritic, being praised for its sound.